Alexander has found a method for detecting precisely the correlations between physical and mental…and for creating a new sensory consciousness.
John Dewey
Healing is making whole – restoring a state of balance. Stress is a primary or aggravating cause of most illness, and frequently obstructs the body’s efforts to return to a state of health. I have long been aware of the body’s ability to heal, through observing myself and others. The game is to get your mind out of the way and let your body do what it knows how to do. Our physical instrument, the human body, performs best at a level of highly refined neuromuscular balance.

The Alexander Technique and Hatha Yoga are wonderful complements to each other.

The Alexander Technique is a means of creating and maintaining balance, of rediscovering strength by reducing effort and increasing awareness. It is not a system of exercise, as exercises may reinforce habits at the root of the disorder. Rather, the Technique works indirectly: eliminating the psycho-physical interferences, releasing chronically held tension, re-establishing tone in the musculature, and allowing the body’s own coordination and intelligence to operate. 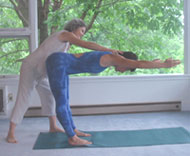 What the Alexander Technique can do for you:

Who developed the Alexander Technique?

Who should study the Technique?

What do others think about the Alexander Technique?

An Alexander class, with both movement and tablework, is usually 90 minutes. During this time, we focus on moving with balance and freedom. While on the table for 50 to 60 minutes, your body will be able to completely relax, regaining its natural balance. You will be able to sense your Primary Control, and play with inhibiting your habitual responses. In one session, thinking becomes clearer, feelings more accessible and movement more pleasurable. After the tablework, there is additional movement guidance. You will gain greater awareness of how to move efficiently while learning to free unnecessary tensions.
Working with Hope is a life changing experience.
Shankara Lowndes

If you would like to schedule an appointment, contact me by email or phone. Ninety-minute classes are recommended. Our time will be designed to address your specific needs.

Read what others have said

Over ninety years ago F.M. Alexander discovered that his poor coordination threatened his success as an actor as well as his health. Unable to meet the demands of performance and unable to find any real help, he was forced to conclude that the source of his problem was something he was doing to himself in the way he performed his activities. He solved his problem by developing a process which retrained his thinking, improved his coordination, enriched the quality of his performance, strengthened and personalized his style. Today, this process is called the Alexander Technique.

Who studies the Alexander Technique?

What do others think about the Alexander Technique?

The Alexander Technique is endorsed by and is included in the curriculum of many major institutions including The American Conservatory Theatre, American Dance Festival, Brandeis University, The London Academy of Music and Dramatic Art, The Julliard School-Music and Theater Divisions, Manhattan School of Music, The Royal Academy of Dramatic Art, London Royal College of Music, London San Francisco Conservatory of Music.

Distinguished students and supporters of the Alexander Technique: