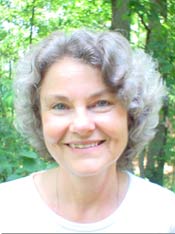 I was first introduced to the Alexander Technique in 1979. After five classes I was pain-free from the migraine headaches I had experienced for fifteen years. To say that the Alexander Technique has changed my life is an understatement. It is the foundation for the rest of my activities. It is with a grateful heart that I share this gift, of Exploring Alexander’s Discoveries. Some people come for classes once a year, during their yearly visit to the Ashram. Some come once a week for an extended period of time. The rule is to suit yourself.

I was five years old when first discovered my sensitivities in the healing arts. My mother had headaches, sometimes lasting for days. I would use touch, massage, cool cloths, and flower petals, and when I was finished she would say the pain is gone. I would also notice her skin color, her walk and her eyes, yes, she was indeed feeling better.

In 1968 I was living in Brooklyn, New York and looking for a Yoga class. A friend suggested that I come with her one night. The class was at 500 West End Avenue, home of the first Integral Yoga Institute. As I lay on the carpet, a beautiful feeling of peace came over me, and I knew I was home. A few weeks later, I was invited to hear “The Swami” speak. “The Swami” was H.H. Sri Swami Satchidananda. I had never seen or heard anyone like Him. It was clear to me that He was speaking truth, even though I could not understand some of the words. I was transfixed. I had met my Teacher, the one who would guide me in the way to live and serve. Every element of my life was changing, and I was learning and growing in ways I had never dreamed of.

I took every class offered in Integral Yoga, and began attending retreats. In 1973 I received Mantra Initiation from Sri Gurudev (Guru in Sanskrit, means remover of darkness.) I then began serving as a staffing member on retreats. Soon, it was time for my training to teach Integral Hatha Yoga. In 1974 I received my certification. I was filled with joy, my senses were becoming sharper, eyes keener and inner life deeper. Sri Gurudev was speaking each Friday night at the Universalist Church, on Central Park West. He was so available, so willing to be constantly serving, answering questions until late into the night and allow anyone who wished, to receive Darshan. 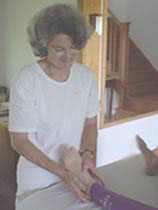 In 1979, I had my first of many Alexander Technique classes with June Ekman in New York City. I knew this was going to help me in many areas of my life. I could sense subtleties in movement that were previously unnoticed. My Hatha Yoga practice deepened and my body was freer.

June organized several workshops over the next few years, led by Marjorie Barstow, a Master Teacher, from Lincoln, Nebraska. I was invited to these intimate gatherings. Marj, as we called her, had been in F.M. Alexander’s first training class in London, in l934. She then went on to work as his assistant for eleven years. She was instrumental in bringing the Alexander Technique to the United States. Meeting Marj proved to be another important moment for me. During one workshop, various people were talking about a summer study. She very casually said, “Why don’t you come. People come in June and we “Explore Alexander’s Discoveries.” It was simple: I was going to Lincoln.

While in Lincoln, I had the great privilege to study with Marj every weekday for the month of June. That first year, I met Martha and Bruce Fertman, Directors of The Alexander Alliance in Philadelphia. While in Lincoln, I decided I would begin my Alexander Technique training in Philadelphia. In 1988, I completed the 1600 hour training course and was certified to teach.

In 1987 I started spending more time in Yogaville, the community that surrounds Satchidananda Ashram, in Buckingham, Virginia. In l99l, I moved and I am delighted to be living in this community. I would love to meet you and Explore Hatha Yoga & Alexander’s Discoveries someday….